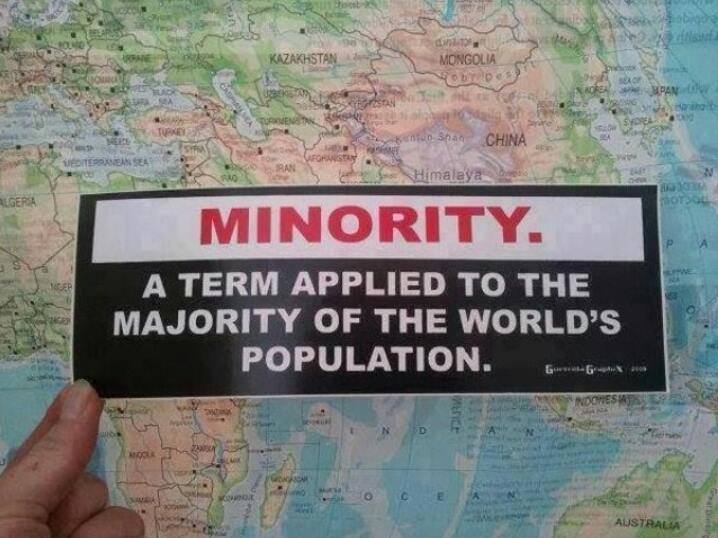 I saw this image making the rounds on social media the other day — presumably aimed at humbling otherwise self-important racially, politically, economically, etc., dominant groups. I find it rather interesting, since the slogan only makes sense, of course, if “minority” is defined as “not us” — that is, while seeming to make a progressive point it actually nicely reinforces that the world is naturally divided between us and all those whom we judge as being not like us.

That is, despite innumerable differences among people worldwide, “they” are all defined here as a cohesive group inasmuch as, I guess, they are, well…, not us — thereby nicely reinscribing a normative set of characteristics that comprise an idea of “we,” ensuring that they are indeed the measure of all things.

Instead, why not consider that both “majority” and “minority” are mutually defining identification techniques — they require each other and one can’t use one without calling the other to mind; one is in a minority only when defined from a specific view, and defining the majority of the world from that one point of view (e.g., as not being Caucasian) is no less problematic to me than the position such a slogan seems to be trying to lampoon, for the comparative standard can’t help but be self-serving and “we” are still in the driver’s seat. For now, the array of differences within the so-called Other (i.e., upon closer look, “the Other” is hardly a uniform group) are all ignored in favor of one supposedly unifying trait: they’re “not white” — which, of course, lets everyone know what the comparative ideal still is and whose in charge of speaking about difference and identity.

In a word, that’s precisely what we call Othering — something the image/slogan accomplishes in the midst of supposedly critiquing it.

So, depending how you slice it, we’re all in the minority and we’re all on the margin, with all of us working to portray our outpost as the metropole — that might be the more radical message, when you think about it.