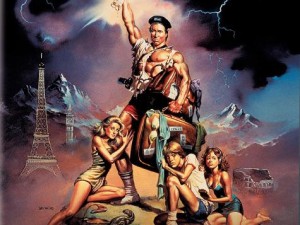 As I write this, I am returning from Germany, where I’ve had the pleasure of teaching a short course at the University of Hannover. When I wasn’t teaching this past week, I spent some time doing what most tourists do: wandering the city looking for trinkets to bring back to my family. When I asked my students where I should look for some gifts, most did the equivalent of rolling their eyes while telling me there was nowhere cool in Hannover to go (one student, in particular, humorously – and yet repeatedly – directed me to Berlin).  But despite the fact that I was armed with a good map, a subway ticket, and directions to the shopping district, my task ended up much harder than I thought it would be.

To paint the picture even further, I was an English-speaking American woman with very, very poor German looking for something to purchase for my kids that would be at least somewhat different (and hopefully a little “German” to boot) from what they already had.   My kids love t-shirts in particular, but I wasn’t particularly enamored with the “I LOVE HANNOVER” ones that I saw hanging in overpriced tourist shops. I envisioned that I would just pop into some boutique or store and pick up something with some sort of German emblem on the front (maybe something having to do with soccer – that is, futbol – for my kids were all avid World Cup watchers) and I’d be on my way. After all, how hard can shopping really be?

Through many hours and a couple of days later, however, all of my efforts were for naught. No matter where I went, no matter how hard I searched, everything I found was virtually identical to what is sold in American stores (down to the same brands, in many cases).  Or, more to my surprise, all of the children’s t-shirts and toys were emblematized in English, and so you can imagine my frustration as I looked through racks and racks of t-shirts that read things like “I’m a Pretty, Pretty Princess!” and “Watch Out! Firefighter in Training!”. In everything from the mom and pop shop to the large, German department store, I failed to find anything my family would like that I also felt was distinctly “German.”

Anyone familiar with globalization knows that my failed shopping excursion was one obvious sign of its power at work.  But perhaps the more underlying identity matter with which I was wrestling was the question of what is “authentically German.” It seemed beyond-ridiculous to bring back leiderhosen and sausages, and I must admit shaking my head a bit when I was handed some gummy bears on the plane arriving in Germany.  Yet after several hours of shopping, I began to have a rather philosophical conversation with myself about what, exactly, I thought I was looking for. And in all honesty, I reached for those same gummies in a supermarket after my desperation about finding a sufficient number of authentically German gifts had risen to new heights (because aren’t gummy bears bought IN Germany the German-iest thing of all?).

My quest to find something suitably “German,” then, exposes not only the nature of identity – shifting and constructed – but also the discourses of purity and authenticity. Rather than boil this all down to the popular critique that globalization has functioned only to homogenize the global landscape by wiping away any cultural authenticity that ever existed, perhaps it’s more useful to think of globalization as something that exposes how identity is formed – in the confluence and mish-mash of hundreds of millions of cultural elements all determined by networks of power and authority.

And yes, I found something for the kids.