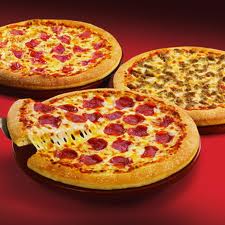 I had the good fortune to be able to accompany a group of my students on a short-term study abroad trip to India last year.  It’s perhaps no surprise that, while there, I consumed a lot of Indian food.  On the surface, that last sentence may seem rather ridiculous if only because it seems so obvious — much like saying “While in India, I saw Indian things!”  But an event on our trip forced me to reconsider just how simple that observation really is, and where the parameters surrounding “authentic” and “traditional” cultural labels really lie.

On one particular night, our Indian hosts offered us a very impressive, home-cooked meal featuring many traditional foods of that particular region.  It was a lavish spread.  As our group ate, our host’s grandchildren – two pre-teen boys – happily bypassed the elaborate feast for their preferred food (which, their mother noted, they ate weekly): a barbecue chicken pizza from Pizza Hut.  As we all ate, I made a passing comment to the boys about their preference for pizza over “real” Indian food, and they laughed a bit in polite dismissal before being sucked into the reality TV show that they were watching.

As I later considered my brief exchange with the boys, I had a vision of how ridiculous it would sound to ask a bunch of kids from the American south if the Pizza Hut that they were eating was some sort of snub or forfeiture of their traditional foods of collard greens and fried chicken, or if kids from Maine somehow feel a little less state pride knowing that their pizzas are replacing their consumption of lobster.  Nevertheless, this was exactly the sort of question I had posed when I engaged the boys, for I had presumed that they had some sort of tie to the food I was eating (the traditional Indian meal), and that I had a more fundamental connection to the food that they were eating (the pizza).

It might seem that the main thing to observe from this culinary phenomenon is the shrinking of the world’s cultures at the homogenizing hand of globalization, for clearly there are foods that once did not exist in India (Pizza Hut) that now are available worldwide. This, however, seems to be only one side of the story.  If we apply that same standard of authenticity and age in our labeling of other phenomena, we may suddenly find ourselves enmeshed in very blurry, shifting barriers over which and whose practices constitute “legitimate” cultural exercises, based on perceptions of identity that are not only static, but also quite singular. As scholar Stephanie Coontz has noted in her research on the structure of American families, the nuclear, heterosexual, middle class white family idealized in the 1950s was more a figment of the imagination than it was a realistic expectation for most Americans, if we look at the sheer number of Americans who lived that lifestyle.  Despite this, our expectations and ideals still revolve around various incarnations of Ward and June Cleaver, even though they represent “the way we never were,” to quote Coontz’s title.

I suspect that those boys would have been just as shocked to hear that their pizza and reality TV are“un-Indian” as I would be to hear that my weekly yoga class and foreign-made (but highly popular) vehicle are “un-American.” Acknowledging the dynamism involved in claiming cultural authenticity, then, is not a rejection of the fact that things have distinction and come from somewhere, but it is an acknowledgement of something else:  that our current interests often dictate how these things are situated in our own symbolic constellation more than any essence held by the “thing itself.”