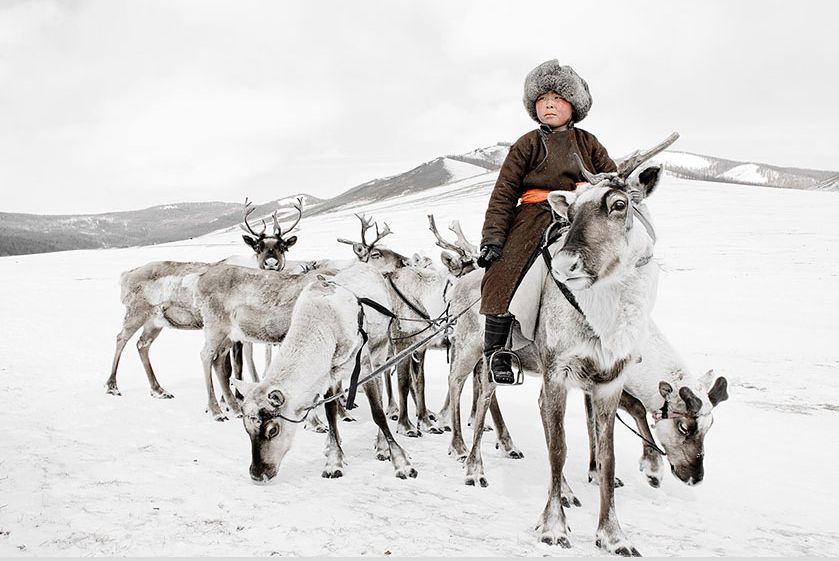 So embark on a journey to the most remote corners and meet the witnesses of a disappearing world….

Have you seen this site, advertising a book and video, documenting vanishing peoples around the globe?

So, as Jimmy Nelson narrates it, he’s in “far northern Mongolia …, in the middle of winter”; he got drunk, inadvertently peed all over himself, and thereby wrecked the camp of Tsaatan people who were hosting him.

Could there be a better story, though, to illustrate the uncertainty principle, of how those who think they are merely documenting events are themselves the center of attention, causing the results that they claim only to be witnessing?

To press this point further, isn’t the ability of a photographer to get to remote people, pose and photograph them, and then come back, publish a book and give a TED talk about them, and thereby make the them whom he posed of interest to us, part of the reason they’re disappearing? For to them, whomever they may be, I’m sure they’re not remote people at all — they just live where they live and do what they do, simple as that; they’re remote to us, after all, and once we know of them, they’re remote no more. Just as you may now know, for the first time, of the Tsaatan and their reindeer’s love of salt.

Oddly, perhaps, it’s always all about us, despite how we portray it as being all about them.

So too with scholars who think they’re somehow accessing deeply held beliefs, the insider’s perspective, the local traditions, and what really happened so long ago. If there ever was any authenticity — which I doubt, of course — it’s already gone the moment we take out our camera and frame the scene, or grab our pen and paper and begin documenting the answers that only our questions elicit.