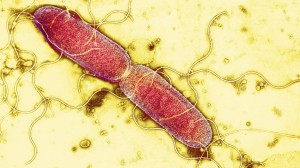 A radio report today was on the Human Microbiome Project, which (according to its own website), “is one of several international efforts designed to take advantage of metagenomic analysis to study human health.” What caught my ear in particular was when Lita Proctor, the director for the project, said:

Given that “[t]he horde of microbes is so vast that their genes swamp our genes. In fact, 99 percent of the genes contained in and on our bodies are microbial genes,” it should cause us to pause and mull over just what we mean by “our” and “their” — by even distinguishing microbes from human in the first place.

The trick is in starting to hear claims about “the human,” “humanity,” or “the human condition” and “the human spirit” as an identification practice making it possible to think and act into existence a very particular sort of human being and very particular sorts of human relationships, rather than as neutral descriptors naming an obvious and universal fact of existence. For while such terms as human and microbe, us and them, certainly have analytic utility, is there any better evidence that they do not actually point to distinguishable things in the world so much as name generalizations that we make, all depending on our interests scales of analysis?