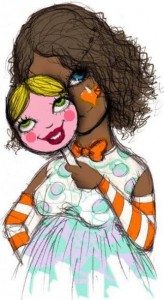 Code switching is often used to reference the actions (usually linguistic variations) of a particular person/group that is assumed to break from their own “natural” practices to perform codes “not their own” for the purposes of fitting in, acquiring capital, and accessing spaces thought to perceive the “native” practices of the switcher as illegitimate or illegible. This switching, or shifting as some call it, is often painted with a stroke of fluidity and described to take know-how, precision, performance and rehearsal. While the durability or recapitulations of code switching may come to be seen as natural over time, where it’s no longer recognized or described as a switch, it’s often thought to be something that is and can be [consciously] turned off and on like a light switch by the social actor.

In a previous post about code switching, the question of, “whose variation gets to count as variation” was posed as a way to think about what practices – or things – become classified, seen or understood as switching and which ones are often left unnoticed and thus seemingly absent of code? Can discourse on code switching perpetuate a notion that some [usually the marginal group] switch more than others [such as the dominant group]? While it can certainly be argued that code switching in and of itself arises as a push against and critique of what is deemed to be normative, could the logic of switching run the risk of giving normativity an appearance of naturalness, leaving it in place and without question?

Put differently, might talk of something being ‘hybrid’ or ‘creole’ for example normalize “dominant and linguistic cultural codes” through an assumption that some languages are mixed and others are not? Or that two or more homogenizing things meet up, intermix, and create something new while not recognizing that the two things we set aside as “pure” are already in and of themselves mixed? In part 1 of this series, we suggested that it’s often the case that English is not considered a creole language …but, after all, isn’t it?  Furthermore, whose English gets to count as English? Aren’t all languages and cultures creole to some extent?

On a different note, we might consider how some switching presumably “passes” [able to accomplish a particular goal] and others “fail” [left unrecognized]. If a switch fails, who is doing the misrecognizing? If it must be done “just right” in order to accomplish that which it sets out to do – are those seen as “unable” to switch lacking some sort of coded ability over and against the switcher? Where might switching end and habitus begin? If habitus is misrecognized for switching does it [switching] then lose its supposed subversive edge? Perhaps they’re one in the same. That is, habitus helps us understand the ubiquity/ordinariness of code switching because it helps us to think about even our conscious choices as being coded/structured.

NPR’s Code Switch, suggests that, “When you’re attuned to the phenomenon of code-switching, you start to see it everywhere, and you begin to see the way race, ethnicity and culture plays out all over the place” – encouraging a closer look at and consideration of an expanded understanding of how the everydayness of code switching can help to explain the world.

Let’s take for instance the cruel and unfortunate character assault that ensued as soon as 19-year old Rachel Jeantel, the star witness for the prosecution in the Trayvon Martin trial, opened her mouth to testify on Martin’s behalf. Born and raised in Miami, Jeantel’s first language is Creole (through her Haitian mother) and she also speaks Spanish and English. In most instances, someone who is tri-lingual is celebrated as ‘smart’ and ‘exceptional’ – but in this case these qualities were not extended to Jeantel. When she began to testify in the courtroom, defense attorney, Don West broke his cross-examining script by asking, “Are you claiming in any way that you don’t understand English?” This was a curious question for someone who had been, all along, both understanding and responding to the questions asked in the English language. Unable to get over his own stereotypes of difference and linguistic purity, West pushes his question further by asking Jeantel if she has difficulty understanding English given that “Creole” is her first language. Of course, she replied, “No.” West’s violent interrogation and policing of the ‘sound’ of Jeantel’s English [enough to make it an issue] was further perpetuated through harsh public comments about her ‘poor English skills,’ competency, and education level. Pathological claims that led many to question the credibility of Jeantel’s testimony. As you can imagine, and rightfully so, many commentators rushed to the defense of Jeantel, claiming that she does know and speak English – just a “distinct” sort of English as the result of combining and moving in and out of three linguistic abilities (Haitian Creole, Spanish, and English).

Although West singled Jeantel out for her linguistic “difference” based on sound, suggesting that it was different to the point of unintelligibility and misrecognition – he fails to see himself as too speaking a hybrid language disciplined by the codes of power in the courtroom. Moreover, in our rush to defend Jeantel’s dialect and distinctive linguistic hybridity we too run the risk of propagating the ideas that English is not a product of variation and that there are certain ways to speak it ‘properly.’ The reality is, Jeantel, had the circumstances, context and power arrangements been different than they were, could have so easily asked West the same question – giving him back what he thought was a problem but was in reality a problem of his own making not uninfluenced by racialized difference.

One could suggest that Jeantel was already code switching to the extent that the idiomatic rules of each language were operative while giving her testimony. But if code switching is a script of ability/consciousness/awareness witnessed by a certain kind affirmative effect and outcome where the switching largely goes unnoticed as to appear natural – then how do we explain – or do justice to – “scripts” or “switches” that are illegible and become misrecognized as something else [like disrespect]? Jeantel did what she was supposed to do as a witness – the claims of illegibility rest upon the classifier and not the classified.

Might the everydayness of switching make it something not so exceptional after all? Take for instance the context an office with a wide variety of workers from Presidents and CEOs to secretaries and interns. Might the secretary speak to the intern in the same manner in which he or she might speak to the President? Probably not if the secretary is privy to where power lies in the structure of the office and thus what codes are necessary to follow as protocol and which ones aren’t. At a company dinner these codes and expectations are liable to change. More than likely the secretary’s speaking to people in different ways would not initially be classified as code switching – for she would just simply be seen as “doing her job.”

Do students code switch in the classroom when they show a certain kind of deference to the professor that is not extended to their peers or are they just being students, staying in their place and respecting authority?

When we begin to see code switching/shifting as something ordinary and always happening – rather than something exceptional and unique with an always subversive intent – we begin to see that the “invisible norm” of the dominant group is neither neutral nor unchained from ideology [although certainly powerful enough to be able to navigate the social world as if their variations are not variations].

If we maintain a discourse of code switching as deviation from or shifting towards the norm through a hybrid like re/presentation of the norm that re/performs the [seen as natural] codes of the norm, does that not ultimately leave “the norm” in place as the norm while creating another master narrative of successful subversive switches by which other group members can then be judged? This type of thinking contributes to the illusion that Jeantel’s variation was the one out of place while West’s use of the English language is natural, proper and without difference.

The dilemma of “Whose variation gets to count as variation?” necessitates first, an awareness that it’s all variation in the first place and second, a dissociation of variation with value, meaning, consciousness and ability.

One Reply to “Whose Switch is a Switch?”