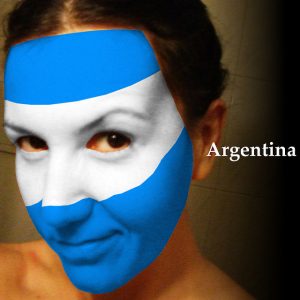 When I first watched it, I only knew it was an Argentine twist on Trump’s words, so I expected a more direct, political challenge to his xenophobic rhetoric. For almost half of the video, before the images on the soccer field itself, I found it difficult to make sense of it. Once I placed the video in the context of soccer, finding meaning in it was easier.

While we often act as if a word has a fixed meaning and thus a phrase is clear in its point, this ad illustrates the importance of expectations and context in the process of interpreting meaning. “We have no protection. Anybody can come in. It is very easy, and it shouldn’t be that way,” takes a totally different meaning when placed in the context of a sports metaphor as opposed to immigration.

The contexts of the soccer ad and a presidential campaign appear pretty obvious, making it easy for most people to agree on how to interpret the assertions, once we have identified that context. But in the case of other forms of speech and texts, the context may only provide limited clues and is often highly debated. Is a particular phrase a metaphor or a literal assertion? Is the narrative autobiography, allegory, or fantasy? When dealing with translations or texts from other cultures or eras, the possibilities increase further. The process of word selection depends on a translator’s interpretation, and in some cases a series of translators’ interpretations. The greater the distance from the context, the more difficult it can be to decide on the context and thus discern clues to potential meanings.

All of these complications highlight how our understanding of the meanings of a text or a narrative reflects our expectations and assumptions about the type of speech or text and its context. My interpretation of the video shifted when I abandoned my expectations about the video being a direct political statement from Argentina. Even still, the intentions of the creators are not entirely clear. While the interest in hyping a soccer team is fairly evident, to what extent is the ad making a larger political statement? Determining that has much to do with our assumptions and little to do with the creators of the ad itself. In fact, the intentions of the creators, who used images and words preexisting their creation, no longer really matter. As Roland Barthes asserted, the author is dead, so the meaning is more about us.