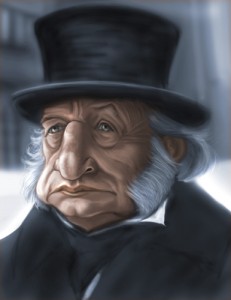 Well, I prefer the adjectives thrifty or sensible, actually, but not everyone agrees. When people observe my spending habits, such as infrequently eating at restaurants and preferring to shop at thrift stores, some may decide that the negative connotation of the classic images of Ebeneezer Scrooge and labels like tightwad and penny-pincher are appropriate. Even with an agreed-upon characteristic, the tension between self-selected labels and ascribed identities remains, with various normative values embedded within those selections.

Presuming agreement about this characteristic may also be inaccurate, as I will spend money on things that I identify as important. When those things are not what others see as normal or important, then I appear rather profligate, no matter what justifications I generate about my choices. So, in multiple ways, this characteristic and the ways it is labeled reflects the perspective of the person generating the label more than something inherent within myself. Even labels that I select for myself reflect my interests in self-representation.

An aspect of that self-representation is my construction of origin tales for my propensity to frugality that generate a notion of continuity. As a child, I remember learning the Boy Scout Law.

I can selectively highlight the ninth point — Thrifty — as a point of continuity with my upbringing, while ignoring other issues in relation to Scouting that I no longer accept. In terms of inherent tendencies, I can also look back for generations to the thrifty nature of my grandparents, who chose not to spend much money even when they had it available. My parents maintained that philosophy of spending less and saving for the future that they learned from their parents. So, I come by my thriftiness honestly, as long as we ignore all the ways that I make different choices about where to spend my money than any of them.

Of course, all of these designations come from a stereotypical American consumer position. When I suggest that my choice not to eat out often is a sign of frugality, to many people in the world, eating pizza at Mellow Mushroom, even if it is very seldom, is excessively profligate, not to mention the consumer electronics that my family and I have. My thriftiness depends on the scale on which you judge such designations. So, please call me thrifty, and ignore all the ways that this label is problematic.