His daughter, Bernice King, who is the executive director of the Atlanta-based King Center for Nonviolent Social Change, has been widely quoted as recently saying the following to the Reuters news service: END_OF_DOCUMENT_TOKEN_TO_BE_REPLACED 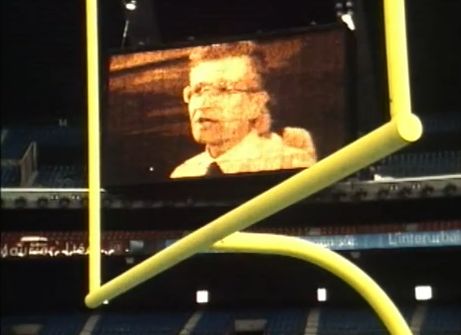 While I admit to having issues with the sort of individual, rational thinker that Chomsky presupposes when he’s making his critiques of the (often unseen) politics of dominant institutions, his thoughts on identification practices via sports (the clip is from the 1992 documentary, “Manufacturing Consent: Noam Chomsky and the Media”) are worth posting, I think — what with the U.S. national championship in College football just having passed by (Roll Tide), the Superbowl coming up in a few weeks, and also the Winter Olympics in Russia, and all the media hype that comes with each of those. END_OF_DOCUMENT_TOKEN_TO_BE_REPLACED

The thing that’s interesting about this game is the way that it quite successfully markets nostalgia, such as the custom-made vintage uniforms they all wear and the “old timers” game between long retired NHL players that’s also part of the weekend’s activities — a point nicely identified by a friend on Facebook during the game, who noted the wonderful contradiction between the old school “leather” look of the goalie pads and gloves but the modern high-tech helmets and visors the players were all still wearing. END_OF_DOCUMENT_TOKEN_TO_BE_REPLACED

“Faced with Franciscans who deployed an evangelism of a culturalist type and sought to legitimise authochthonous civilisation to the point of taking care to respect its established hierarchy, the sedentary natives of New Spain chose to submit and to accept the Europeans’ religion. However, they converted ‘in order to remain Indians’. The END_OF_DOCUMENT_TOKEN_TO_BE_REPLACED WWBAS?: What would Benedict Anderson say…? Okay, I’ll go for a 9/11 post…but I’ll make it quick.  I’m seeing a lot of images on Facebook like the one above, posted by friends of various political persuasions.  All these friends can appeal to what they have in common, after all–a unifying sense of patriotism and national identity. END_OF_DOCUMENT_TOKEN_TO_BE_REPLACED The United States is a nation of immigrants with the Statue of Liberty welcoming the “huddled masses” one of those frequently invoked traits. Beyond questions over the place of Native Americans in the nation of immigrants and contemporary debates over “immigration reform” and “border security,” the recent court case involving a yoga program in the Encinitas, California, public schools (which I have discussed previously here and here) illustrates the imagined nature of this national trait in a surprising way. END_OF_DOCUMENT_TOKEN_TO_BE_REPLACED

Yesterday was Father’s Day in the United States, a manufactured holiday (like any other) that promotes socially-sanctioned sentiments through the mass production of “World’s Greatest Dad” cards and mugs. The day before US Father’s Day, multiple attacks in the Pakistani province of Balochistan included a form of symbolic patricide, as a group fired rockets to destroy a residence where M. A. Jinnah, regarded as the father of Pakistan, had lived in Ziarat, also killing the police officer guarding the site. The other attacks in Balochistan that day reportedly killed dozens, including bombings at a women’s university and a hospital, both in Quetta (a few hours away from Ziarat). While Lashkar-e-Jhangvi, which some people link with al Qaida, claimed responsibility for the hospital and university attacks, the Balochistan Liberation Army (BLA), identified as a separatist group trying to gain the independence of Balochistan from Pakistan, claimed the attack on Jinnah’s residence. END_OF_DOCUMENT_TOKEN_TO_BE_REPLACED