The thing that’s interesting about this game is the way that it quite successfully markets nostalgia, such as the custom-made vintage uniforms they all wear and the “old timers” game between long retired NHL players that’s also part of the weekend’s activities — a point nicely identified by a friend on Facebook during the game, who noted the wonderful contradiction between the old school “leather” look of the goalie pads and gloves but the modern high-tech helmets and visors the players were all still wearing. 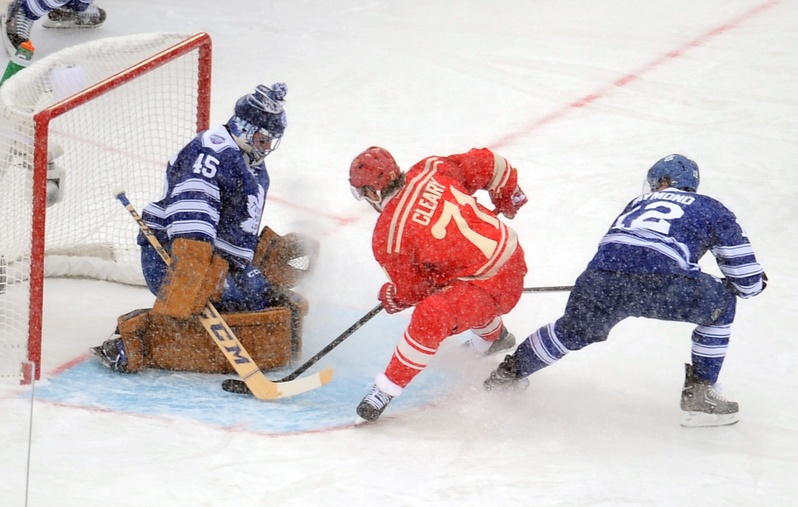 Attempts to achieve authenticity smuggle in all sorts of contradictions, of course. After all, no one wore helmets back in the day — the toothless grins, back then, of many hockey players told you as much.

But having grown up on Canada, not so far from Toronto (Go Leafs), I think the nostalgia that works so effectively in these sold-out games is linked not so much to emulating the way professional players once looked to fans but, instead, to acting out the memory so many in the north have of growing up where you learn to skate outside in the winter — whether on frozen rivers, lakes, ponds, canals, or maybe even on backyard rinks that were built and groomed with care by moms and dads or older siblings late into the cold night, spraying a fine mist of water from a garden hose onto the ice. 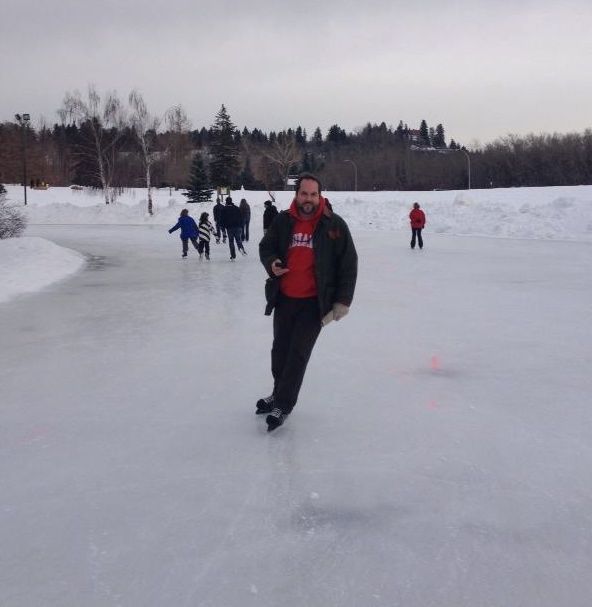 That’s why seeing it snow as they played that New Year’s day game, seeing the Toronto goalie wearing the toque (pronounced two-k — yes, that’s what you call that knitted winter cap in Canada, not a toboggan, as it was called in Tennessee), covered in snow all throughout the game, surely struck so many as endearing and folksy, thereby obliterating the gap between awkward kids skating on a pond and a high paid professional athlete.

And everyone’s toes get cold skating outside.

They successfully played on this at the end of the game, in fact, by announcing the men’s U.S. Olympic hockey team’s members by having little boys and girls, wearing jerseys with each player’s name across the shoulders, skate briefly toward the camera, do their version of a hockey stop, and then turn to show the name — no one fell. And that’s likely why all the players, in the pre- and post-game interviews repeatedly used the word “fun” when describing what was transpiring — for I’m guessing that out there on the snowy ice the gap between themselves today and those little boys they too once were, playing hockey outside, late into the evening, with friends and family, had somehow just disappeared. It’s not so different, really, from how the small town simplicity of baseball’s storied origins lingers in the minds of those attending big league games.

When it comes to the north, those memories of skating outdoors are shared by many — that picture of me above, skating while on a trip to Edmonton, Alberta, last winter, should indicate that I certainly have my share of them — memories that, if mobilized and managed correctly, not only unite disparate people into a group (whether the shared idea of a little league team or a nation) but can also sell donuts and coffee to them too.