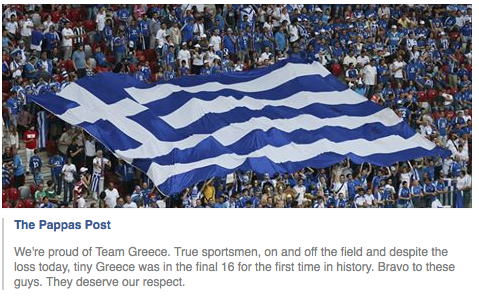 “Personally I couldn’t care less” — that’s what I wrote to a Colombian friend who teased me through Facebook about Greece’s first loss in the tournament against them, the Colombians. And the truth is I didn’t care because I don’t care for football in general; it’s not my favorite sport and never has been. But I certainly won’t forget the 2014 World Cup.

I’m not sure if I have ever watched an entire game when I was in Greece. I didn’t even watch the final game in the 2004 European Championship, when Greece made it to the finals and won — I couldn’t recall against whom we played that game. I learned the news from friends, to which I would simply raise my shoulders and say: “Oh, did we?! Good!” I was even surprised that a Greek friend here in Canada, who was born and raised in Canada, when I asked her a year ago what she would like me to bring her from Greece, of all the things she could ask, she chose a t-shirt of a football player that was quite the name back in the 2004 European Championship.

But things can radically change.

After that game with Colombia I decided to watch the next game with Japan, a tied game, and quite boring to be honest, which only confirmed that football is a boring game after all, yet, there was something, a certain link to my home country the match created — we didn’t win but we haven’t lost either. I admit, with a tiny bit of shame, that I was eagerly waiting for the next game against Cote d’Ivoire; a game that, if Greece won, would qualify us for the next round.

So the day came and the game begun and half way through I realized that it was not just “Greece” playing but “We.” It is amazing how, from an indifferent spectator, I became a fan: “I never would have thought that watching football would feel so good!” I wrote to a friend after the end of the game. And that unexpected goal at the last few seconds that qualified us to the 16, that is, to the next round of the World Cup! It takes four years — my guess is that it takes even less — being away from home, and a tremendous nostalgia that this distance creates, to come to the point that I will describe in the next lines. Thus what was even more interesting is that the first to report on social media, and I’m referring to Facebook, about the game that we won against Cote d’Ivoire were my Greek friends who live abroad, including myself; talking about “our boys” who did great today, “What a great game,” “We are through” — things of course not unfamiliar for anyone who follows any type of social media, since this is the vocabulary every fan uses when their country does well, “Goooooal” would also be one. Of course my friends in Greece were likely busy celebrating out on the squares, or around the White Tower, which I could very easily imagine, and all I was left with, at my Canadian home away from home, to celebrate, to be connected with other Greeks, was Facebook. 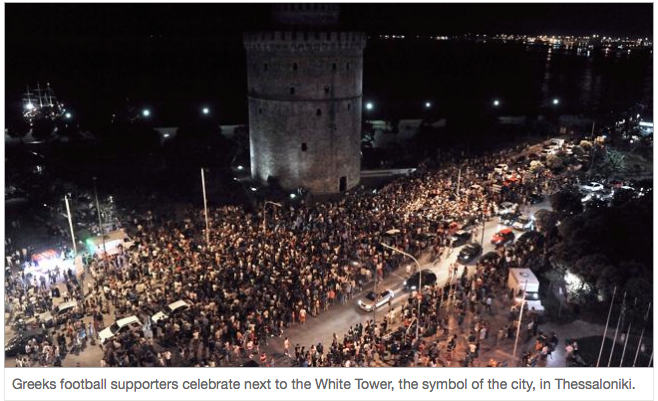 So, we qualified to the next round playing against Costa Rica. Agony beyond what I can describe, and all amidst of cooking — to release some of that anxiety and also another way to be closer to home I guess (I was cooking Greek food, after all) — I was a fan, I had a laptop, and I was watching the game online… 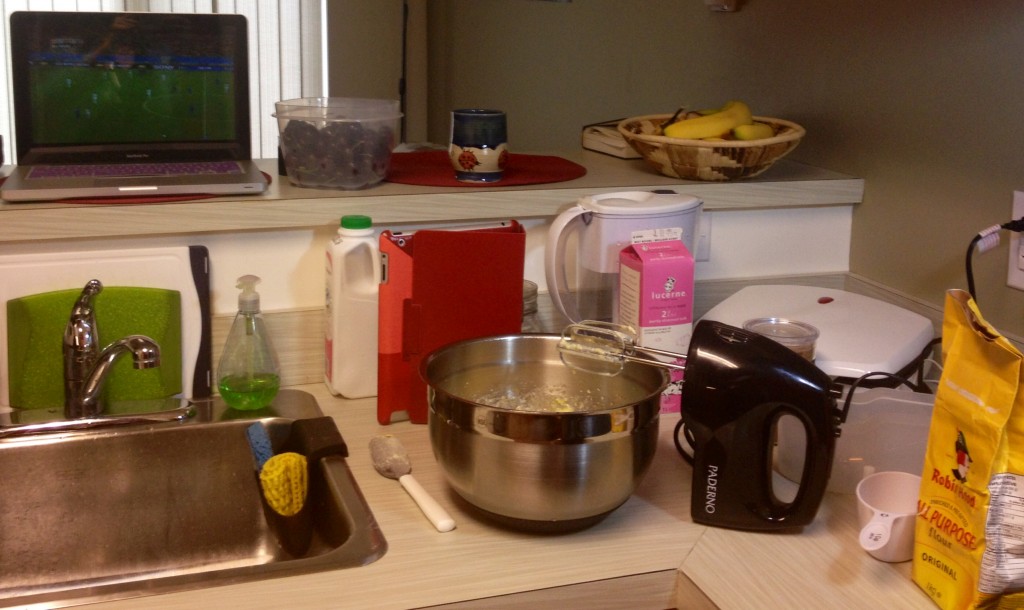 It was a game that seemed to take forever to finish, since we tied it in the last minute and that meant playing for an extra thirty minutes, in which time no one scored and yes, we lost that game in the penalties. But I have to say: “What a dramatic game.” But I could not have imagined a different way for us to leave the tournament; actually it was the best way, and no Greek would think differently, because we own Drama (and if you don’t know, yes, it is a Greek word). We lost, yes, but we’re proud to be Greeks. Notice the caption on the first picture on the top from a Chicago-based Facebook page: “tiny Greece,” only to suggest what a great thing we did.

Again, the first to write on Facebook and say that “We are still proud,” “Bravo to our boys,” and “No matter what I’ll keep on singing,” were Greeks who live abroad — no word from friends in Greece. I suppose the stakes are higher for us since the need to defend our home country is more immediate, so much more in loss as we know we will be teased by our foreign friends, and we become even more passionate about defending who we are and where we come from. Needless to say, absence makes the heart grow fonder and away from home makes home all the stronger a pull on “us,” “we,” “our,” and a football game, a team dressed in blue, the Greek flag when the camera would show footage of the Greek spectators, made the gap, the distance away from home, seem to disappear, just like a hockey game can have the same effect for others…

There are many lessons to be taken, I suppose, amidst the things that I tried to describe above; one is, of course, that here we have another example, same as Steven Ramey phrased it in his blog, of how “we continually construct our identification with an imagined community.” I felt closer to home, to Greek friends in various parts of the world, much more than I normally do or even think about. Talking about the Greek loss to a Russian friend who left Russia when he was three and never been back since, this is how he described their loss over Algeria even though they tied the game:

“You had to see the disappointment falling over the faces of Russians all over the world, of course they didn’t show any footage of this on TV, but…, I mean…, you know, right?”

The truth is that no, I didn’t know how their faces looked because all I could imagine were disappointed faces painted in blue and white. So, miles away from home, and a 90 minute drama (in its oldest meaning: an action, a praxis) can create the conditions for someone to identify as this or that nationality — because being Greek, or for that matter any nationality, is a drama in progress.

And as for you readers, here is the challenge: if you paid enough attention to my use of personal pronouns (which I typed in an unmediated flow of thought and noticed only after I read what I wrote), then you’ll see that there are a lot more interesting things happening in my use of “we,” “us,” “them,” etc.

Nostalgia is an effective way with which group or individual identification is constructed. Nostalgia is a process, an effort, even a struggle to a return to a place or a time, through an ideal restoration, from the present and out of present needs, to an imagined home or an imagined past. That’s why, I suppose, a football game never felt that good to me before, living in Greece, because it allowed me now, being far from home, to “tap my heels together three times” and be home (or at least to whatever I imagined as “home”), even if only for 90 or so minutes!