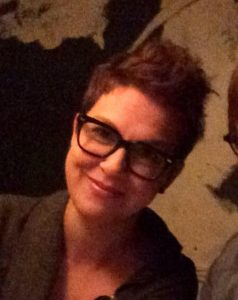 My Ph.D. is in English, so I bring a literary theory background to religious studies and try to put some proverbial money where my interdisciplinary mouth is. What does that mean in practical terms? Well, I write and teach about a lot of different things, but they tend to involve my interest in when and why ideas about authenticity or realness seem to appeal and have traction and when they don’t. Along the way, I apply identity theory outside the field to my own academic study of religion.

In both my teaching and research, I’m always talking about questions of identity in one way or another. My Religion and Literature seminar, for example, isn’t about finding “religious themes” in literary texts but is rather about issues to do with authorship and authority. My students and I talk about who manufactures and reproduces canon and how, what ideas about literary tradition tend to imply and exclude/include. The focus in my Religion in the American South seminar is on the politics embedded in commemoration and memorial efforts. Through what means do people tell stories about their own pasts? Whose stories get told or ignored? How do these stories become “history”? In my Introduction to the Religious Studies course, students do not rehearse a catalog of rituals and traditions around the world but instead ask how such rituals and traditions come to be called “religion” in the first place and about what kinds of effects that label carries in different spaces. My goal in every class is to encourage students to be curious about themselves — what they normalize and/or tend to take for granted, how they go about using different words to describe and navigate the world around them, and why these processes matter.

I said earlier that teaching and research should be interconnected, and this is a good example of how this works for me. In my own writing, I look at how various designations (like “hybridity,” “post-blackness,” “strategy,” and “subversion,” just to name a few) function in critical discussions about race, region, gender, and sexuality. I’m interested in how terms like these work in different attempts to lay claim to certain identity spaces and thus create, consolidate, or destabilize authority — whether in literature, religious communities, or academia.

Most immediately? I’m interested in stuff like: how discourses on posthumanism might trouble (or at least complicate) our investments in both insider and scholarly subjectivity; how futurity and fantasy are embedded in narratives about the past; how many licks it takes to get to the center of a tootsie roll pop… ya know, the usual.

A lot of what I’ve written so far has to do with what I see as the rhetorical pitfalls often present in scholarly work on (especially African diasporic) subjectivity. In my first book, Changing the Subject: Writing Women across the African Diaspora (Ohio UP, 2014), I investigated the ways in which authenticity rhetoric — by way of calling Janie Crawford as an authentic feminist heroine or locating the true historical origins of Tituba, etc. — proliferates in contemporary literary criticism reading black women’s migration narratives. As the protagonists move from place to place, they experience radically different identifications of race and sexuality, especially in relation to the kind of work they are expected to do. Their negotiations of and responses to these identifications, it seemed to me, entertain far more nuance and variance than the scholarly analyses of them. In my own analysis, I looked at how and why rhetorics of truth and realness appears to be so useful for this vein of criticism.

In an essay I wrote for the recent Culture on the Edge collection, Strategic Acts in the Study of Identity (edited by Vaia Touna), I took a similar approach, this time in relation to scholarly discourse on Caribbean religious traditions. Specifically, I was interested in how ideas about collective identity and motivation remain present in discussions of hybridity and flux.

I’m working on my next monograph, tentatively entitled Sourcing Slave Religion: Theorizing Experience in the Archive. In it, I will historicize certain terms (like race, religion, Atlantic, and South) needed in order to deploy the concept of “slave religion,” along with the political and theoretical apparatuses operative in those deployments. In the late 1960s/early 1970s, when black studies was finding formal institutional footing, “slave religion” was an important site of analysis for scholars looking to trace a linear progression across continents and centuries from rituals and traditions during the Middle Passage to twentieth-century black Protestantism. Contemporary race scholarship in religious studies maintains this mode of inquiry in the form of descriptive historiographies and/or recovery work that gives attention to unfamiliar case studies. In this way, the important historical work on race and religion written in the institutional beginnings of black studies remains canonical in the field, but in a way that has left scholars resting too easily with its initial gains rather than making good use of the theoretical tools honed in identity theory over the last thirty-or-so years.

A central question for me is to what to do with the inevitable gaps and silences that greet us in archives. I argue for a methodological approach (I’m playing around with the concept “discourse diaspora” — not as a replacement term that solves anything in its own right but one that at least helps keep front and center some important entanglements that I think should be kept in mind — will it work???) that rejects recuperation as a scholarly aim and instead finds theoretical possibility in the unsalvageable and the irretrievable. My own way in to thinking all this through comes by way of archive theory, queer theory, and critical improvisation studies — a combination I’m digging a bunch right now.

Also in the works book-wise is a volume on gender that Craig Martin and I are writing together for the Critical Primers series that I edit. Focusing on themes like experience, politics, and authority, we want to highlight the ways in which critical discourses on gender and religion draw upon and deviate from one another in relation to these shared themes.