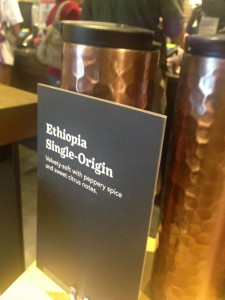 These terms coupled together create a homogenizing effect through mythological constructions of singularity and originality. What could possibly be singular about the country Ethiopia and the coffee beans produced there (consider, for example, in Ethiopia, there are over 90 individual languages/communication systems operative)? Just a brief consideration of the (cross-cultural and geographical) travel involved in the producing, manufacturing and selling of commodities like coffee beans from this place and that ought to shift such discourse on the perceived distinctiveness of such claims. This manufacturing (and marketed) sleight of hand helps to produce a compelling illusion of cultural authenticity based in and on a fabrication of a certain sort of mythological past that can be consumed in the present without accounting for (a wide variety of) change over time and space.

So … come sample coffee ground and brewed here made from coffee beans of that place over there all while purchasing and consuming such a product right here with the swipe of a card.

Seems to me that claims of origins always begets new discourse of origins on prior origins of which such origins are used in the present to create new claims of beginnings which in the future will be posited as “The” origin point for a new discourse on authenticity. Only until …a new (origin) narrative takes its place and the cycle begins again.

How do you study origin narratives?

6 Replies to “Fabricating Origins …One Coffee Bean at a Time”