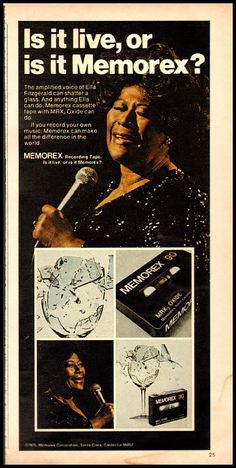 On Twitter earlier today it occurred to me that the old commercial advertizing Memorex brand cassette tapes (did I just date myself?) is an apt way to get at the problem of people who try to distinguish between, on the one hand, representation — an activity acknowledged to be lodged within the problems of discourse — and actual or authentic lived experience, on the other.

The problem with the ads is that, despite how they frame the issue, we never get outside of the taped voice; for Ella’s supposedly live voice is coming to our ears over our own television’s (or now, computer’s) speakers and carried there by innumerable mediators.

It’s even more apparent in their later ad for videotape:

For everything we see in the commercial is on tape, played over our television’s picture tube or on our smartphone’s screen, making the image only as crisp, only as life-like, as the medium through which it moves and the assumptions used to decode it — suggesting that the “it,” the so-called source, is not some pre-medium identity but a product of the medium itself. (Thank you Marshal McLuhan.)

So is anything ever live, every present in real time? For optic and auditory nerves are media no less than fiber optic cables, no? Life — as a few before me have already argued — is always merely life-like.

“It really isn’t me,” she says in her sales pitch — yes, but that’s because it never is (Question: how deep would we have to go to find the real you, for if I met that woman in person would she have to remove her make-up for us to really meet her? Exfoliate too maybe? Would we need to hear Ella with no mic and prior to years of rehearsal? Will the real Ella please pipe up….); so to think that we can opt for one over the other — live or Memorex — strikes me as a false choice designed to prioritize — correction, to sell — one representation among the many others.

It’s like the chatter online now — something a few of us were talking about on Twitter too, the other day — about Keira Knightley‘s choice to be photographed topless as a protest against the use of Photoshop to manipulate images of women. 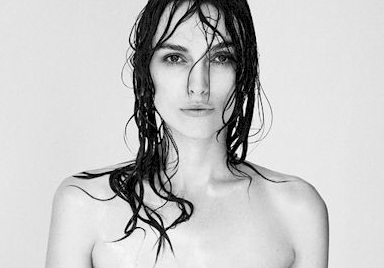 Apart from the many ironies attached to this story — such as the above-linked article’s observation:

— she’s hardly some authentic version of herself just because the image lacks digital augmentation of her breasts. For, like my own cropped pic above, there’s all sorts of edits and augmentations always and already present (the pouty lips are a nice touch, don’t you think?), making the choice not between the real and the artificial or between naked lived experience and the thick layered cake of distorted discourse but, instead, between which façade we’ll treat, for the time being, as the source.

After all, even I blow-dry my hair.