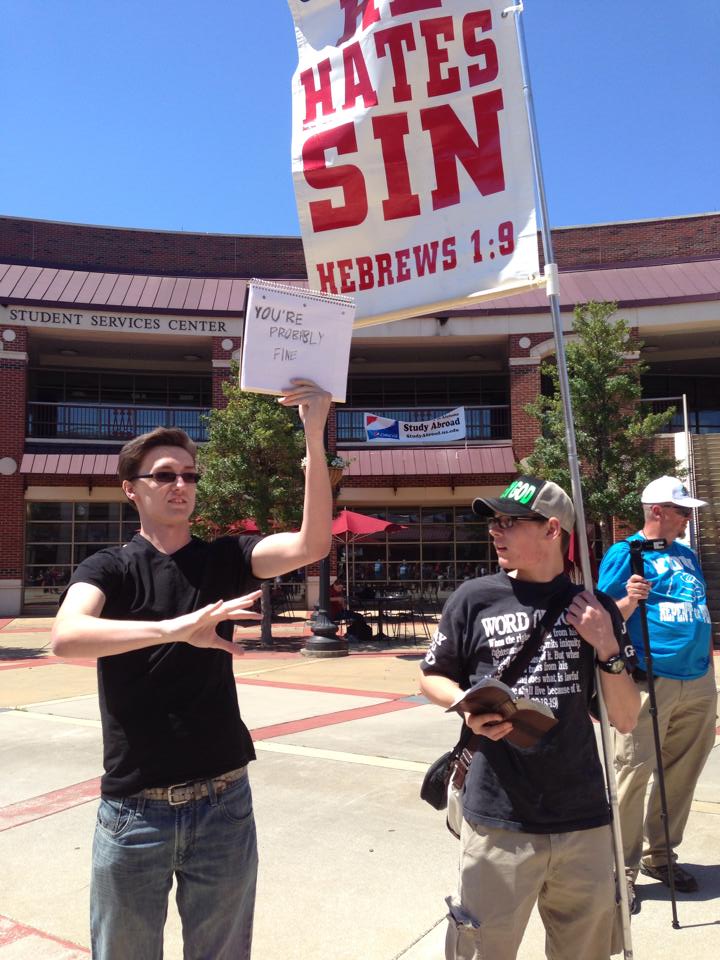 Yes, it’s that time of year again — no, not tax time, but when the itinerant preachers start making the rounds of U.S. university campuses (at least here in the south), preaching the good word, telling the young women not to wear make-up, and just generally creating a stir for an hour or two on campus, in our designated “free speech zone.”

They usually attract quite a crowd — whose members aren’t afraid to exercise their own free speech rights in reply.

Of course there’s many things that this all brings to mind for a post such as this, but the one that strikes me as most relevant for the Edge is the manner in which the pro/con structure of these exchanges affords many college students the opportunity to feel liberal and enlightened even though, were the exchange happening in another setting, with another interlocutor, they’d surely come off looking traditional and rather conservative.

For when measured against the limit set by these preachers the onlookers’ shouted retorts about what they somehow know Christianity really is, how scripture really ought to be read, and what Jesus really was or wasn’t all about, don’t sound normative at all. They just sound like common sense opposing the unreasonable demands of the preachers and their placards.

But those same student claims, in another situation — say, if they were shouted back at a vocal, itinerant atheist coming to town to preach a different version of the good news — would surely paint those students rather differently. For now they’d be the religious conservatives.

All of which is a nice lesson in identification working with what’s at hand, making us liberal or conservative but always on a local and relative sliding scale, thereby illustrating that we’re always defined by who we’re not. That the sense of liberal acceptance is created by vocally rejecting the view proposed by the traveling preachers is an irony to be explored on some other occasion.

(If this is new to you, then check out a video from a couple years ago when “Brother Micah,” who also travels the region, was on campus…)

Thanks to Sarah Griswold, one of our students,
who posted the above pic.