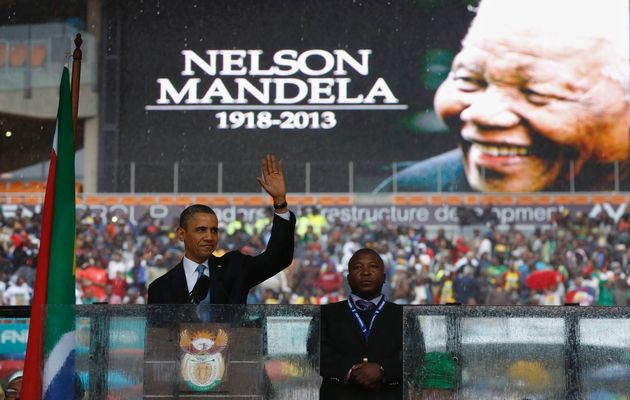 I assume you’ve heard the reaction to the sign language interpreter at the Nelson Mandela memorial a few days ago — the fellow who wasn’t signing anything meaningful. It’s a great example, really, of how signification works.

For starters, compare his gestures (on the right), at the event in person, to the legitimate signing interpreter who appeared as an insert on people’s television screens.

Both sets of gestures are arbitrary, but only one is meaningful and the other is, well, just wrong.

The general point? While the elements of any signification system (i.e., signs), and the relationships between those elements (i.e., spelling, syntax, and grammar), are arbitrary (i.e., contingent, just as the vertical figure “1” didn’t have to signify “one,” and neither does that arrangement of three letters, right? They just happen to…), once both the elements and their relationships are codified, policed, and shared between two or more people, then meaning and communication is possible.

So while all signification is arbitrary not all signs are significant — but only those schooled in the rules of the game can tell the difference. Since only he seemed to know what he was doing — if he even did, that is — his signs were meaningless, even outrageous.

Perhaps this sheds a little light on how simplistic many critiques of social constructionism are, for just because something is made up — like stopping at a red light, perhaps? — does not mean that it doesn’t have consequences, doesn’t have effect.