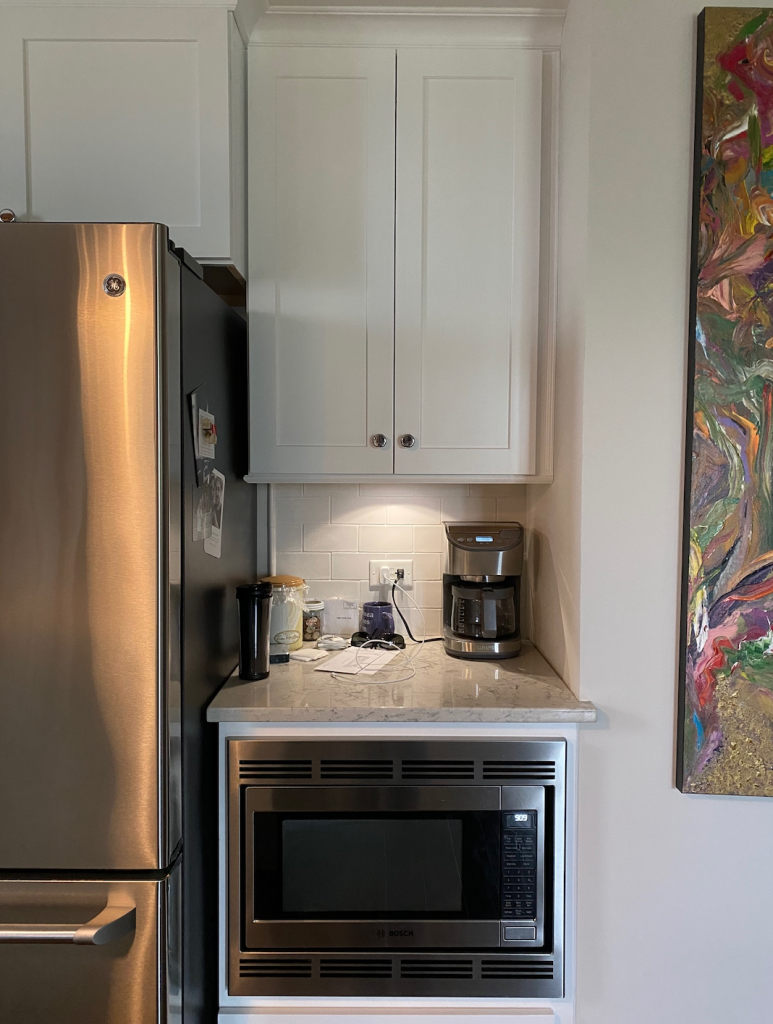 I was putting some clean dishes away the other morning and got to thinking about structure and agency, about how chance relationships become normative patterns — and the choices we make within parameters we never intended.

You see, our kitchen has a small piece of countertop over the microwave, next to the fridge. With an electrical outlet centered on the wall it seemed the ideal place to put the coffeemaker when we first moved in a few years ago. Since outlets usually come in pairs, it turned into our recharging area too. And since the coffeemaker is there, the coffee should be too and — yes, you guessed it — the cupboard above is the logical place to store all the mugs. Oh, and that purple mug in the back is where the dead batteries go, for later recycling, along with random receipts that first start out strewn across the counter and which are eventually on their way to that year’s income tax file. And that glass jar back there? That’s where the loose change goes at the end of the day. And of course there’s some invites and notices posted on the side of the fridge…

Apart from the pretty obvious decision for where the fridge would have to go, who knows how the architect who drew up the house plans intended this little space to be used, but that’s what we’ve done with it — little by little, adding each of these elements and layers until we periodically decide it’s “too messy” and then we reset it, somewhat, back to some near to original state, with new accumulations that then start all over again. And it’s been such a successful process that this is not just the only place where the coffeemaker and the mugs can be but, should we move that recharging cord for some reason then, sooner or later, it’ll have to be returned to this specific outlet. Coz “that’s where it belongs.” After all, we can’t be charging things near to where the fresh fruit always sits in baskets, elsewhere on the countertop.

It might be a pretty mundane example, sure, but it nicely captures how much sheer happenstance is combined with prior, isolated decisions, all made by a variety of actors at different times and for different reasons — such as the day we thought, “Sure, that painting could go there, by the coffeemaker” — all mixed together to produce an ordered, structured setting that we now just take for granted as the way it ought to be.