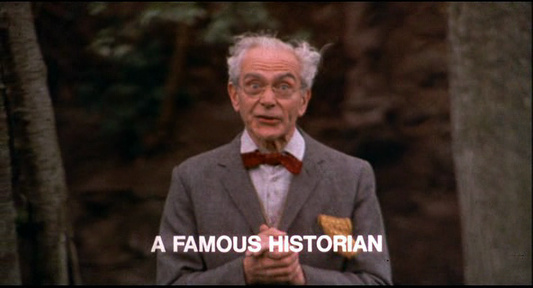 In a recent post I mentioned an upcoming paper I was presenting at a panel in Baltimore on explaining the causes of early Christianity’s origins. My concern in that paper, which I delivered a few days ago, was to draw attention to problems with attempts to account for the origins and development of any social movement — a critique that, for some in this one field, has already invalidated such things as quests for the historical Jesus. However, serious scholars yet persist in trying to account for the originary conditions of this thing we call Christianity.

The goal, of course, is to find out “what really happened,” as phrased by one person during the Q&A. Isn’t it?

The problem with this goal, however, is that the one doing the work must posit a transcendental identity — Christianity — and then, from their all-knowing vantage point in the present, read it backward in time, as if it was there at its own beginning, thereby conserving the interests of a present that creates this particular idea of the past (much as writing the history of any nation-state is itself a nationalist exercise, inasmuch as it naturalizes the idea of modern nation as having an origin and a coherent trajectory that leads directly to the historian’s present). After all, today there are so many specific notions of this one signifier, Christianity, each of which differing in this or that way (Question 1: what do you think, are Mormons Christian…?), that scholars have no choice but to pick and choose, from among the various modern options in front of them — to collect the features they wish to constitute their idealized version of Christianity — and then universalize it as if it had been there all along, percolating and bubbling away over the ages, working its way back to us….

As I argued in my paper: 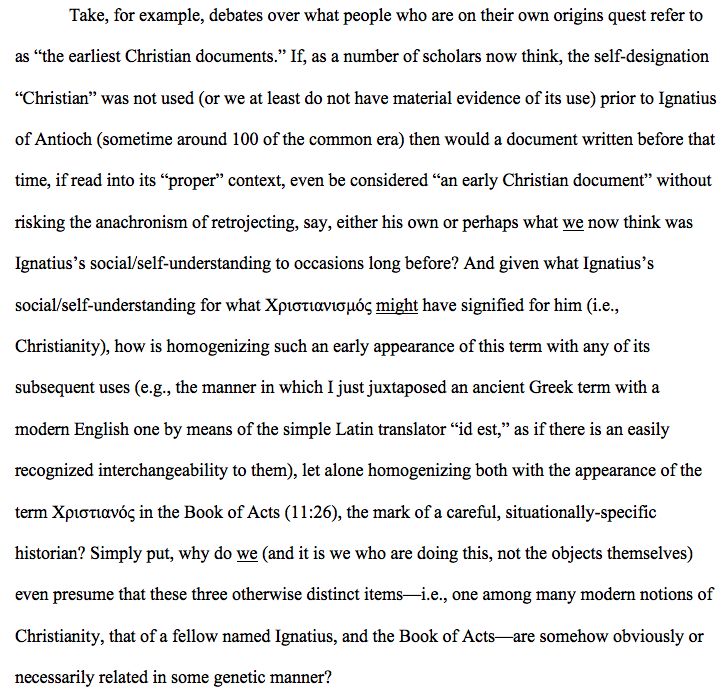 The curious thing is that, when we do it, we don’t recognize this universalizing of present interests and this displacement of origins (i.e., seeing our retrojected stipulations now as if they were merely passive descriptions of their realities then), or the way that we use contemporary criteria to connect things in the world to one another in causal sequences, but we see it all too plainly when others do. And we usually critique them for doing it, for picking and choosing, and having interests.

CHAPTER XLVI: The Word in the World Before Christ

… We have been taught that Christ is the first-born of God, and we have declared above that He is the Word of whom every race of men were partakers; and those who lived reasonably are Christians, even though they have been thought atheists; as, among the Greeks, Socrates and Heraclitus, and men like them…
– The First Apology of Justin Martyr (c. 155 CE)

What’s interesting is that no serious scholar would consider this text to comprise a respectable example of history-writing in a modern sense, since Socrates obviously lived well before Christianity, making claims of him being a Christian an absurd theological anachronism. Right? But Paul also lived well before Christianity, no? For many scholars would agree that the idea of Christianity developed long after those whom we posit as being at its origin. (Question 2: to what does that third person possessive pronoun point, the one I just used?) But modern commonsense tells us that some real fellow, Paul, was there, with desires and intentions that we can still see to this day, if we just read those texts carefully enough — after all, his writings, preaching, and travels were the things that brought the movement into life, making him what those in the business call “an early Christian.” There’s nothing anachronistic in that.

So in what artful way must we — much like that ancient text quoted above — first define and then retroject a certain sense of “Christian” so as to include some figure we call “Paul” in a family that, or so we all know, also includes so much else that we know to have developed long after him? In fact, I have no doubt that much of what strikes us as obviously Christian today would have counted as heretical in previous eras, to previous Christians — making our grouping of it all as “Christian,” regardless what our predecessors might have thought, a peculiarly modern judgment that allows us (not much different from that text of Justin’s, above) to include people in a family who might otherwise not have  recognized themselves as being at home with its other members.

If this sort of self-beneficial and hindsight universalizing is how identification works, then — as I argued in my paper — our goal, as scholars, shouldn’t be to find out “what really happened,” but to figure out what’s really happening when people talk about the past, talk that always happens in a here and now that also implicates us.

Like during the Q&A, after the four papers, when some started talking about the earlier phases of the group at which we had all just presented, previous seminars involving prior members who had their own project(s) that, of course, had not anticipated us, that day In Baltimore, talking about them and their work, let alone linking (through the conventions of quotation and citation) our efforts to yesterday’s, as if in some causal sequence. Why speculate on ancient origins, intentions, and meanings, I asked, when we have real time originations happening like this, right in our midst?

So that was my paper — more or less. Well, actually much less. If you want more, then you might like to read it (PDF).