So many articles have already been written on the awful events that transpired in Paris this past week — articles flying fast and furious around Facebook, including my own wall — that there didn’t seem much to be added by penning yet another post here at the Edge.

But Adam Gopnik’s essay in the upcoming issue of The New Yorker (from which I’ve borrowed the above image) seemed to me a useful springboard to ask a question about the raw materials we draw upon in order to create a narrative that helps us to understand what has happened — a narrative that then shapes what will be done in the wake of these shootings.

They worked instead in a peculiarly French and savage tradition, forged in a long nineteenth-century guerrilla war between republicans and the Church and the monarchy…

So writes Gopnik, near the opening, in an effort to contextualize and thereby make understandable for his American readers, the cartoonists in question, so that we don’t just react to, say, their hook-nosed images of turbaned Arabs but, instead, see the pictures as being in a long and noble political tradition. I’ve heard this tradition of French cartooning discussed much in the articles and commentaries on the tragedy, but what I don’t hear as much is a contextualization of the men who perpetrated these terrible killings. Instead, often, and as found in Gopniks own essay, they are merely “Islamist murderers,” “fanatics,” and “assassins.”

For, apparently, that’s all we need to know to make sense of them and their deeds.

The message? We have a history but they do not. We are nuanced and context is therefore needed to properly understand what we’re up to, but as for them….

When we do and do not choose to dip into the background on the story, provide the context that we think is necessary to understand what might be going on, is therefore telling, I think; for it creates a situation where only certain explanations are even possible to conceive, where only certain plans of action can be seen as credible or desirable.

So when do we need the context and when are actions — regardless your agreement with them or your utter despair over them — contextless and thus self-evident? That seems to be an important thing to examine if we’re asking why anyone would do such a terrible thing and what now ought to be done about it. 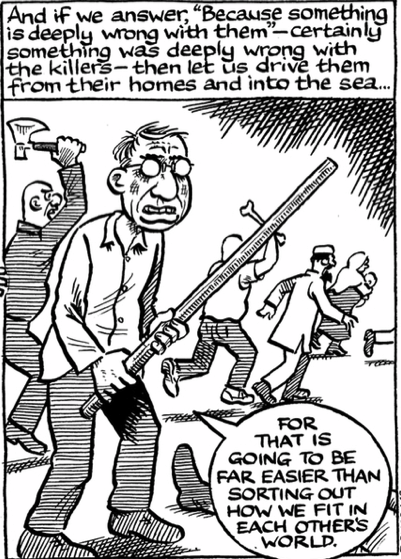