On Friday, May 19, 2017, the mayor of New Orleans delivered a speech on US Civil War monuments that many on the political left have are heralding — a speech that happened the same day that the above statue of Gen. Robert E. Lee was removed.

If you’ve not seen or heard the speech, take a look:

Of course there’s much to be found, online, concerning ongoing, heated debates in the US around flags and monuments (or the more general topic of how politicized discourses on the past can be), but the New Orleans case is notable given that such a public and strong statement was made by a mayor of a major city concerning the actual removal of statues. (For some background see here.) As such, it’s worth taking a look at what he’s doing in this speech.

I won’t offer a detailed analysis here — that’s up to readers to do for themselves — but simply present the speech and ask:

Can we study the rhetorical techniques of the familiar as well as we can the alien?

That is, though many who heard it likely approved (though not all, of course, since there are certainly plenty of protestors on the right, who attended that removal, who were not pleased with these developments) — but are such 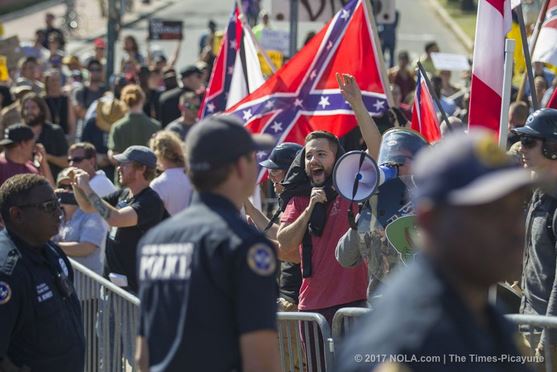 listeners still able to identify the work taking place in his address? For while celebrating the US motto of “from many, one” the speech clearly polices what constitutes that one by making evident that there is a right and a wrong way to talk about the past and a correct and incorrect way to identify oneself as a member of the group. To rephrase: as persuasive as some surely found his words, they likely have not persuaded everyone and so the many persist.

So the question remains: even if one finds the speech effective can one still examine the techniques used to achieve that effect? Or is he just speaking the truth plainly?