The show opens with the historic 1879 Football Association (FA) Cup quarter-finals between the Old Etonians and Darwen FC. The Old Etonians are an amateur team of gentlemen, captained by Arthur Kinnaird (Edward Holcroft), the 11th Lord of Kinnaird. Darwen FC, on the other hand, are a working-class mill team in Lancashire who have just (illegally) hired Fergus Suter (Kevin Guthrie) and Jimmy Love (James Harkness), two players from Partick, a football club in Scotland.

This particular game stands out because it was the first time that a working-class team made it to the FA Cup quarter-finals. The results of that game — warning, spoilers ahead! — set the stage for an underdog story of (arguably over-generalized and stereotypical) class rivalry. With their two new professional players, Darwen FC manage to tie the score by the end of the game and prepare to go into extra time. However, realizing that they would likely lose, the Old Etonians — all of whom are members of the FA — assert that because extra time had not been requested before the game per the FA rules, they would not grant it. Instead, Darwen would have to return the following weekend for a rematch. In defense of this ruling, Kinnaird maintains that hired professionals shouldn’t be allowed to play:

This is a game for amateurs and gentlemen. It’s our game. … the point is we took a raggle-taggle pastime, with different rules wherever it was played, and we turned it into a proper game. For gentlemen. (episode 1)

Fellowes uses the FA’s codification of a “raggle-taggle pastime” into a “proper game” for gentlemen as a primary example of class rivalry with the posh, educated gentlemen creating structure and meaning for the otherwise disorderly, rowdy game played by the working-class communities. As Julian Fellowes explains to The Telegraph:

The whole reason the Football Association was formed was so upper class people who’d learnt the game at school could play against one another under a set of agreed rules. … But, from the moment the rules were established in the 1860s, the sport increased in popularity seismically, it was extraordinary. … The English Game is the story of how these working class teams finally prised control of the sport from the public school boys.

As the series progresses, the emphasis on such class tensions are further heightened when the FA Board attempt to ban the working-class team from the Final Cup. The working-class team owners threaten to leave the FA and start a new association, headed by the FA’s own Arthur Kinnaird (Holcroft), who asserts that football is bigger than the FA and that they needed to welcome professional players because it is the gentlemanly thing to do (episode 6). 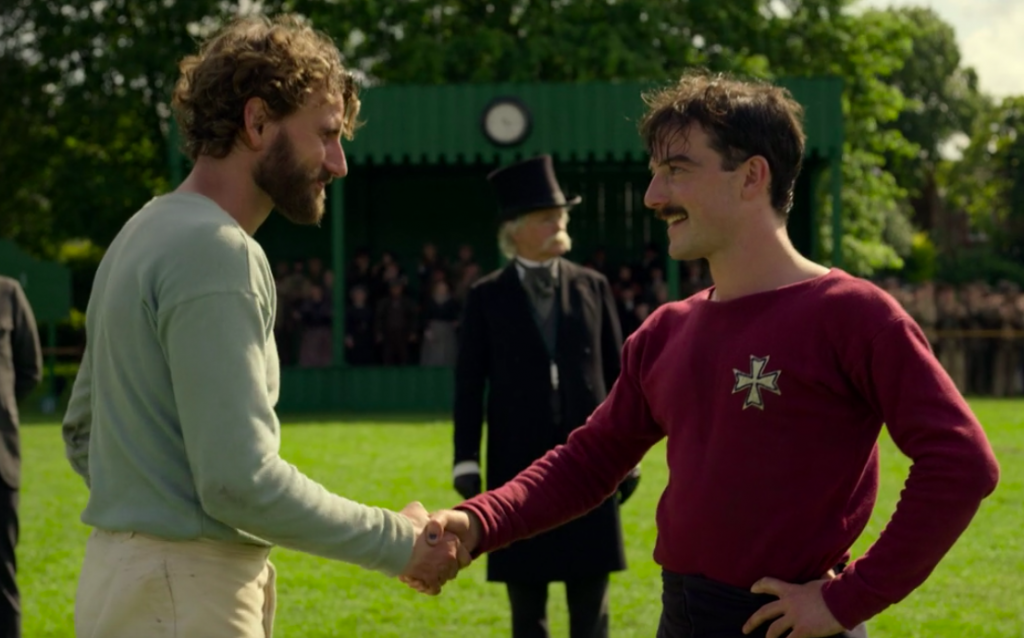 Begrudgingly, the FA agree to let the working-class team (and their hired professionals) play in the finals, and the viewer gets the sense that these underdogs have succeeded against class, economic, and social hierarchies.

Fellowes emphasizes the idea that football is, more or less, all that these working-class teams have to energize their lives, which, he argues, were dominated by their low-paying jobs. The increasing popularity of the game led smaller, working-class teams to hire professionals from Scotland or other teams in hopes of challenging the amateur gentlemen teams in London. Football, Edward Holcroft (Kinnaird) argues in The Telegraph, “gave people freedom, it gave working class people the chance to be paid and a chance that they would never have got.”

While the FA did change the rules somewhat, this adaptation also helped to keep the FA in a position of power. Fellowes portrays the FA as doing the right thing, the “gentlemanly” thing. But from an alternative perspective, the acceptance and inclusion of professional players ultimately helps the FA to manage dissent among the football clubs who are threatening to abandon them. By permitting teams to hire professional players, the FA are depicted as giving opportunities to working-class folks. However, their inclusivity may have been less of “gentlemanly” act — as Fellowes portrays — than a strategic, political move that would allow them to remain the governing body of football.

Though not explicitly addressed in the show, I was left wondering if part of the issue was tied national identity. Though Scotland was part of the United Kingdom, it was still a separate country from England. With working-class teams hiring professionals from Scotland, perhaps the FA worried that the Scottish players would outpace the English.

As football historian and The English Game consultant Andy Mitchell tells The Telegraph‘s Paul Kendall, “The Scottish game was far more effective than the English game at this time. The English version … was more like rugby.” Paul Kendall continues: where the English teams “would just dribble in a pack and try and force a goal through brute strength,” the Scottish teams “developed a way of making space and passing the ball … playing the game as we understand it today.” The series even concludes with this title frame:

Thus, The English Game, by Fellowes’s and Mitchell’s account, is anything but English. However, I am less interested in determining whether football/soccer is actually English or Scottish — or Chinese (dating back to the Han dynasty) for that matter. Instead, I’m interested in why Fellowes narrativizes the birth of football in this particular way.

While the miniseries draws on historical events, the show-runners did alter some historical details to suit their narrative arc. The English Game, like any other narrative, has a certain focus and agenda. So why does Fellowes entitle the show as such? What is at stake in how this narrative is framed? For it strikes me that Fellowes adeptly narrativizes this otherwise complicated and fraught history in a way that positions England as the originary point of football. By demonstrating the FA’s (England’s) “willingness” to break down class and social hierarchies and include non-English players and methods, Fellowes effectively creates a myth of the “English game” that has come to be played around the world.

See “Universalizing ‘English’ Football,” the second part of this series.